Earlier this Spring, Oneida Healthcare presented a “Project Spotlight” at a CNY Care Collaborative Board of Directors meeting, highlighting the success they’ve experienced by incorporating elements of the ED Care Triage program into their daily operations.

The goal of the ED Care Triage project is to identify individuals with an ambulatory sensitive condition or potentially preventable visit and connect them to a Primary Care Provider. The complete “Project Spotlight” presentation is available for view, here.

How did the ED Care Triage project begin for Oneida Healthcare?

The understanding of what this project was going to entail was explained during the ED Care Triage PIC (Project
Implementation Collaborative) calls, which we have been a part of since the beginning. It was clear that we would need a Patient Navigator in order to be a part of this project.

In November, I pulled together our 2015 Emergency Room data for the year, and presented it to our Senior Leadership Team. The data showed that more than 30 percent of our ED visits were Non-Urgent and 30 percent of our ED patients stated they did not have a Primary Care Physician. We also have a large Medicaid population. I explained the ED Care Triage project to our team and what we needed to accomplish in order to be able to count our actively engaged patients. Initially, it was not an easy sell. I was basically asking for an FTE (Full Time Employee) position that was ultimately going to decrease our ED visits -- which would mean a decrease in our hospital volume and revenue.

An understandable challenge -- so how did you convince them?

First, by showing how many patients our Navigator would have to redirect to primary care practices in the course of a year to pay for her salary. Additionally, there was the potential -- through DSRIP reimbursement to recover some of the lost revenue. Not to mention, it was the right thing to do. Clearly, this population would be better served at a primary care office rather than an expensive ED visit. It would also free up the Emergency Department for true emergencies.

Reinforcing the importance of communicating the goals of DSRIP…

Yes, I think our staff has an understanding of DSRIP. Early on, I did a presentation about DSRIP at one of our management retreats. I put a DSRIP related article in our newsletter every month. I have really tried to get the word out. There is probably some frontline staff who don’t know exactly what “DSRIP” is, but every department head knows -- and most of the staff are familiar. I think most would say it’s “Medicaid Reform”.

What are the challenges to making the ED Care Triage project a success? 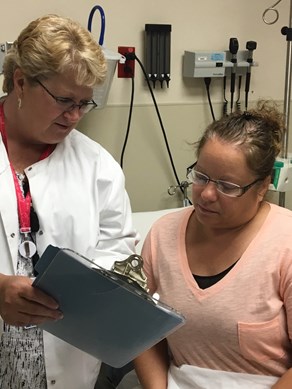 I think the project has totally been a success. The staff, physicians and the patients love having our Patient Navigator Linda there. As time has gone on, it has become increasingly difficult to get a scheduled appointment within the 30 day requirement of the project. However, I believe this was an anticipated challenge voiced by all partners’ right from the start, due to the lack of primary care physicians in central NY.

There is also a misperception in the community that a patient can’t get into a primary care practice. And I think just being able to tell a patient: “the Navigator can help you” is very important. Simply being able to get an appointment with a primary care physician has surprised a lot of patients. She actually gets phone calls now from community members asking her to help them find a physician.

They didn’t think they could see a Primary Care Doctor?

Yes, there are many reasons why. Patients don’t always know which physicians are accepting new patients. In some cases, a patient may have been released from a practice – possibly because they were noncompliant or they didn’t show up for appointments. As a result, the patient feels like they may not be able to get in to any Primary Care Physician, again. Part of the Navigator’s role is to coach patients in navigating the healthcare system. And impressing on them how important it is for them to keep their appointment. She will also set up Medicaid cabs for patients if transportation is an issue.

So how do you counter that perception?

The first step is having a Patient Navigator who can explain to the patient “yes, I can get you in.” And then being able to follow up on that promise. That means working with our primary care practices and saying “I need to get my patient into your office within a month, what can you do?” Meeting with the Primary Care offices and developing a relationship with them has certainly helped with this.

That fact that most of the time we’ve been successful in this process has been a key to our success in this project. In addition, we have a Care Coordinator at our practices who has worked closely with our Navigator and with patients to get them to show up for their appointment and get them on the right path.

What should others learn from Oneida Healthcare’s success with the ED Care Triage program?

I think it’s important to reinforce the focus on the patient. When some people hear we have a Patient Navigator and we are “going to get reimbursed for this” it can put a bad spin on the project. I think just keeping the effort and communication focused on the patient -- and their needs – is really important.

And anybody who’s been in an emergency room knows how many people use the emergency room as their primary care. If there is a program in place that is going to help that situation, like ED Care Triage, people are going to embrace it.

And how has the Patient Navigator role been incorporated?

Oneida has not had a full time Social Worker in our Emergency Room, which most emergency rooms do, so our Navigator has really been welcomed with open arms. She communicates with the staff and doctors and they appreciate her help. The doctors are asking her to do other things outside of the Navigator’s focus.

So it’s important for the Patient Navigator to work with more than just the Medicaid patient population?

Oh yes; definitely. We have never defined the Navigator as for just Medicaid. The role has always been focused on those patients using the ED for their primary care or conditions that could more appropriately be cared for at the physician’s office. And that is the population we are focusing on -- not the payer/insurance. The Navigator will also connect a patient without insurance with our Certified Application Specialist-Exchange product Specialist, to get them signed up for the most appropriate plan.

Do you have a success story you can share?

Sure. We had a young man in his 20s, no insurance, and no primary care physician. Came into the ED with new onset of cardiac problems. The longer he was in the Emergency Department the more anxious he became – worried about how he would pay for the ED visit, much less the cardiologist he was being referred to. Linda was able to get him signed up for Medicaid, and set him up with a primary care physician before he left the ED. He couldn’t stop thanking her, he had such a sense of relief. A few days later, a family member came in, specifically to see Linda, and thank her for helping him.

What are the challenges for the future?

Right now we are trying to develop some creative scheduling to help our “no-show” rate. Even though our patients are very sincere that they want to have a primary care doctor we have had some instances of them not showing up for their scheduled appointment. When an hour is blocked out for a new patient exam, and a patient doesn’t make it to the appointment…that is just time lost for our practices.

Any advice or words of encouragement for someone who may be in the early stages of implementing the ED Care Triage project?

I think the group of hospitals within CNYCC are all very willing to help and share with each other. If you have any problems or questions, just reach out to the group. Everyone is in a similar situation, and we all need to be successful for the collaborative to be successful. Working together, networking, problem-solving and sharing ideas – that’s what it’s all about.

Join our mailing list for our most recent developments and important information, including the CNY Care Collaborative Weekly Newsletter.